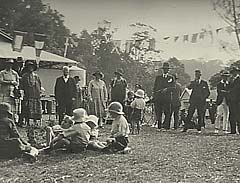 An application for the establishment of a public school at Pretty Beach Extension (or Hardy's Bay), together with a strongly worded letter from the Wagstaff and Pretty Beach Progress Association outlining the reasons for the proposal, was made on 7th January 1925. The application was signed by 25 parents on behalf of 52 children aged between three and thirteen years of age. Previous requests for a school dating from 1921 have been declined on two previous occasions.

(The letter) stated that children from Pretty Beach, Hardy's Bay and Killcare were picked up by launch which left Wagstaff Point at 8:00 a.m. daily. After a run of 51/2 miles Woy Woy was reached at 9:10 a.m. if on schedule. From this point a half-mile walk was required to reach the school. The return journey was made by motor bus from Woy Woy to Ettalong Jetty. The children needed to be at the Jetty by 4:00 p.m. in order to catch the afternoon launch service. School hours were thus cut by at least 50 minutes per day, and the parents complained that their children were disadvantaged by this. In winter, trips were made in bitterly cold conditions on open expanses of water, and the exposure of the children to accidents along this waterway route was a source of great concern to parents.

The Department finally recognised the need for a school and a large site of nearly twelve acres was purchased at Pretty Beach for the sum of six hundred and fourteen pounds in the latter half of 1925.

The school opened in January with the appointment of Mr Charles Allen on 18th January 1927. There is little likelihood that on that day Charles Allen foresaw that he would spend the next twenty-two years at Pretty Beach School, and that even then, that termination would only be caused by his death, on 11th December 1949, at the age of 63. During that time he appears to have been highly efficient, diligent, keenly interested in the affairs and the upkeep of the school, and on excellent terms with the local parents' Association.

In April 1928 Mr Allen reported that white ants had begun to establish themselves in the boys' and girls' toilets the Department decided to remove six tree stumps from the school grounds to reduce further infestation, and James Mitchell of Pretty Beach was awarded the contract for four pounds ten shillings. The white ant problem was attended to by the Department of Public Works.

In May that year, the P & C Association made their first request to the Department, asking for a weathershed. The claim was reinforced by the teacher who explained that part of the verandah was occupied by a wash bench and a work bench. The exit steps were over three feet from the ground and the verandah was consequently unsafe when so many children - the enrolment was then 57 - played there during inclement weather. Although the verandah was exposed to squally southerlies and cold westerlies the request for a weathershed was declined.

An incident concerning the illegal removal of trees from the school property occurred during Christmas Vacation in 1929. Although evidence from two youngsters, one who saw him felling the trees and one who saw him removing the timber, pointed out the guilty person, and although both the teacher and the local police believed their testimony, the Parents and Citizens' Association did not wish to press charges because the man was a locally known waster and they considered his wife would suffer should they do so. The matter was allowed to lapse.

The Association strongly urged the Department in March 1933 to appoint an assistant teacher, stating that it was unfair both to pupils and the conscientious Mr Allen, whom they thought would reach break-down level from the pressure on him. Growing enrolments at the school had prompted Mr Allen to write, in March 1932. "The total enrolment at this school is 70, (effective enrolment 65) as follows: Class 1 10, Class II 14, Class III 8, Class IV 12, Class V 12". Approval of the application was given in April and Miss Florence Roach was appointed assistant.

Problems were created by this appointment because it became apparent that more space was needed. The P & C Association offered to pay half the cost of enclosure of the verandah to provide another room. The work cost a total of six pounds, twelve pence and was swiftly completed. this work was only a temporary measure, however, and by June 1933 it was recognized that the accommodation problem was acute owing to growth of enrolments to 80 pupils with only one classroom and the use of the verandah. Plans were drawn up for the additions recommended for the school and the tender of Messrs. C.L. Meakin & Son of Auburn was accepted, to cost a total of three hundred and twenty pounds The work was completed about two weeks outside the contract time, in December 1933. With the completion of the new classroom the cleaning area increased from 1,313 sq. feet to 2,208 sq. feet thus warranting the employment of a cleaner for six hours per week. Payment for this work was eleven pounds, two shillings and threepence per annum. Prior to this Mr Allen had undertaken the cleaning at the school himself.

Both the P & C Association and Mr Allen made requests in the latter part of 1933 for: 1) the provision of a fire place or stove for drying clothes during wet weather; 2) the enclosure of the verandah (built on to the new classroom); 3) the provision of a separate W.C. for the lady teacher. The P & C was informed that Pretty Beach Public School: 1) was outside the area within which means of heating classrooms was provided; 2) funds were not available at that time for the enclosure of the verandah; 3) arrangements would be made for the closest accommodation for the lady teacher to the cost of thirty three pounds which sum was to include an amount to be used for the treatment of the white ant problem which has recurred...

With most of the teething troubles behind them, the P & C Association resolved to beautify the school grounds. Consequently an approach was made to the Department for assistance in completing the work of renovating the fence which would keep out cattle who were forcing their way into the school grounds ruining shrubs and plants and leaving a mess behind.

An abashed Mr Allen reported on November 1936 that he had failed to secure a 60% pass at the 1934 Primary Final Examination but thought this was due to the fact that he was absent on three months leave prior to the examination. The new Chief Inspector noted that this was one of the contributing causes because in 1935 an 80% pass rate had been attained.

Unfortunately for Mr Allen his next assistant, who did not enjoy the best of health, stayed only one day. After making a few local enquiries which were not very fruitful, he was informed by the Department that the assistant had applied for a month's sick leave on advice from her doctor but during that time her resignation was tendered.

During his twenty two years as Teacher-In-Charge, Mr Allen showed himself to be an efficient and capable teacher, keenly interested in the welfare of the pupils passing through his hands. Backed by an active P & C Association the school continued to thrive. Charles Allen died on 11th December 1949, still at the helm of Pretty Beach Public School.

Return to top of page

We would like to pay our respects and acknowledge the traditional custodians of the land and also pay respect to Elders both past and present.

Copyright for this website is owned by the State of New South Wales through the Department of Education. For more information go to https://www.dec.nsw.gov.au/footer/copyright.